On conga lines, a seaside library, and the surprise of a girl’s rehab center: REFORMA Nat’l Convention V

By Meg MedinaApril 6, 2015No Comments

You haven’t lived until you’ve done a conga line to the strains of Miami Sound Machine with a bunch of happy librarians. That’s precisely what I did during the dance party/dessert reception at the fifth annual REFORMA national conference in San Diego last week.

I’ve mentioned REFORMA here before. That’s the arm of ALA dedicated to library services to Latinos – and a partner in the Pura Belpré award, along with ALSC. This year about 300 librarians, authors, teachers, and community leaders – many sporting pins with slogans like Sí – hablo español – gathered to share ideas and best practices.

It had a lot of the usual conference fare: panels, keynotes (mine at the pool on a broiler of a day). But the event had the unmistakable feeling of friends coming together for support and fun, too. Maybe that’s what Ana Elba Pavon meant when she called it “time with my REFORMA family.”

Look, you can’t blame me for being a little giddy about going to San Diego, land of the eternal sunny-and-low-70s weather, especially after this winter. But I got a lot more than a few days in the sunshine.

I was surprised to run into Teresa Mlawer, who has been duking it out with the translation for Yaqui Delgado Wants to Kick Your Ass, which she says is the hardest book she’s ever had to translate. (She’s done quite a few, like classics, Where the Wild Things Are and Caps for Sale.) She’s trying her best to keep the voice and idioms, all while making the book sound not like a translation, but as though it was originally written in Spanish. She promised to come on this blog – or sit on a panel with me some time – to talk about this tricky process. All translations are not equal. All Spanish is not the same. It’s a minefield, I tell you.

Another fantastic surprise was the morning I spent at the Girls Rehabilitation Facility through a program called the Juvenile Court Book Club. Thanks to librarian and board member Jennifer Lawson of the San Diego County Public Library, I spent the morning with girls, all under 18, who are  incarcerated, but who have earned privileges for good behavior. I didn’t know what to expect. Would I be walking into an entire room full of Yaqui Delgado’s?  What I found was an incredibly engaged teacher named Yolanda (originally from Philly) and a smart group of girls with good questions. So little separated them from the middle and high school girls I meet everywhere else.

If you’ve read Yaqui, you know that it takes a look at living through violence, making mistakes, and finding the strength to regroup. The girls at the center have probably felt lost in the face of all they’ve seen. Their mistakes or lousy circumstances have cost them dearly. But here they are, strong girls trying to find a new way to see themselves. It felt like a gift to spend time with them, and I am very grateful to Candlewick, my publisher, for donating copies of the book that they could keep. 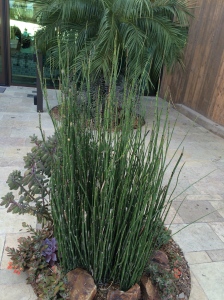 Nice entrance to the library

Take a look at the Encinitas branch of the library where I did a small panel with Mary Pearson (The Adoration of Jenna Fox, among other titles) and Stephanie Diaz, who, at age 21, is about to publish her third book in a sci-fi trilogy with St. Martin’s Press. Amazingly, Stephanie wrote her first novel and query letter at age thirteen. Check out her website and share it with every kid who tells you they’ve got their novel ready. All things are possible. 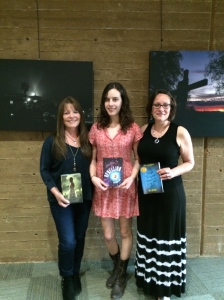 With Mary Pearson and Stephanie Diaz

Then it was off to REFORMA. I took in a few sessions, including one about DIA celebrations. I’ve done DIA events in the past (Paint Me a Story, remember?), and I’ve tried to be part of the diversity celebration every year since then. ALA has recently referred to Dia as Diversity in Action, to include all cultural groups. But in California, where they’ve been celebrating April (especially April 30) for ten years or more, they largely still call it Dia de los niños/dia de los libros as it was originally conceived by the legendary Pat Mora.

I think a missing piece is still DIA programming for teens. As luck would have it, the Dia day that I’m part of at the Library of Congress YRC at the end of the month is geared to parents, librarians and teachers of middle grade and high school youth. Here’s the invite: DIA UPDATED INVITE

The authors on the panel are all middle grade and YA authors representing a range of cultures. It’s a good start, but now my wheels are turning (uh-oh) on how to tap into diverse authors, especially YA Latino authors, to do a month-long Teen Dia something-or-other. (I can already imagine my writing friends reading this and trying to figure out how to put email blockers on me.)

Dancing based on Aztec storytelling at Noche de Cuentos.

The conference also had evening events at the San Diego Downtown library, which is a spectacle of a building with enormous glass book sculptures, and architectural wonders that make a book geek’s head explode. It even includes a school inside. Go visit.

Folkloric music from Mexico at the dessert reception.

And, finally, yes, there was the dancing. What can I say? We watched folkloric dance for about thirty minutes, and then the DJ showed up. It took all of four notes for the REFORMA past president and the San Diego County Library director to take the dance floor. After that, everyone was up and moving. Before I knew it, Keith Michael Fiels, ALA’s CEO, and I were boogying and following the conga line around the room. Pictures will surface, possibly with blackmail notes. I’ll keep you posted.

Okay – AWP in Minnesota is up next. And guess what, they’re predicting snow showers. Okay, it’s not 70-degrees-and-sunny. But who knows? I might find some great surprises there, too.