By Meg MedinaFebruary 24, 2021No Comments 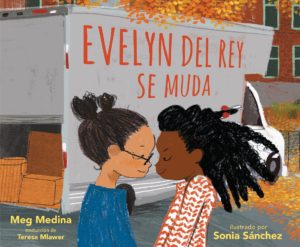 This week, I got a note from Candlewick telling me that Evelyn Del Rey se muda has been named an Audie finalist in the Spanish language category. The Audie’s are the highest award in audiobooks, and this year they received over 1500 submissions across all categories, the largest amount they have ever received.

The news has come at such a poignant time. It has been almost a year since my friend, Teresa Mlawer, the celebrated Spanish language publishing icon, passed away. Even if you’re not up to speed on publishing en español, you’ll recognize her name as the translator of many famous children’s books, like Where the Wild Things Are and Harold and the Purple Crayon. I’m proud to say that she was also the translator of most of my own books, including Evelyn Del Rey se muda, bringing to each work the vocabulary and idioms of Cuban Spanish, the language I hear in my heart whenever I write about family. Evelyn, Teresa told me when we last spoke, was the final book project that she would work on.

Many beautiful things have happened to the English edition of Evelyn Del Rey is Moving Away, but I am proud to say, that with Teresa’s fine translation, the Spanish edition has been well-received, too. It was recently named by Bank Street College as one of the best Spanish-language picture books for kids in 2020. And now, of course, we have this unexpected nomination for an Audie. I want to point here to the immense talent of Jane Santos who breathed further life into those words. You can learn more about Jane’s many other acclaimed audio book narrations here.

I hope Teresa is smiling on Jane and me from somewhere, especially since Evelyn del Rey se muda is the only picture book nominated, itself a huge accomplishment.

Dreamscape Media has been posting about all the finalists this week on twitter with #audies2021. The winner will be announced on March 22, and I’ll be sure to let you know what happens.

But the truth is, that to me, this recognition is so sweet and personal, that whatever happens, we’ve already won. My most heartfelt congratulations to Jane Santos and everyone who worked so hard on this edition. Thank you for all you have done to bring my story into the wider world.

Summer Reading Solution:  A Ready-Made Author Study Guide for You